The vehicle depot is a kind of multi-purpose room in the open air museum. This is where special exhibitions and larger events take place. When the weather is bad, events planned for outside can be relocated here at short notice.

The making of schnapps and Viez

The production of Viez, the Moselle-Franconian name for cider, and fruit schnapps has long been tradition in the region. The basis for this is an abundant supply of apples, pears, different species of plum and other choice kinds of fruit, particularly in the mild climate of the Moselle and Saar valleys. The Romans were the ones who brought the multitude of fruits from the south and naturalised them here.

Read more: The making of schnapps and Viez

Wine growing on the Moselle, Saar and Ruwer

Ever since the Romans introduced vines to the Belgian and German provinces, grapes have been grown continuously on the Moselle and its tributaries. Wine has left its mark on the landscape here for more than 2000 years.

Read more: Wine growing on the Moselle, Saar and Ruwer

Until the 1950s the country grocer's was not only the place to buy your groceries. It was also where to hear how the sick old man from the neighbourhood was faring, or whether the mayor's cow had already given birth to her calves. People had more time, goods were put together on the counter and more often than not they were put down to account and only paid for when a certain amount had been reached.

Piety among the people in the shadow of the Trier cathedral 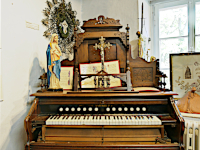 The topic in this room illustrates how important religious life was particularly in the Trier diocese. The dioceses of Metz, Toul and Verdun also belonged to the archbishopric of Trier until the Peace of Westphalia in 1648.

Read more: Piety among the people in the shadow of the Trier cathedral

Wooden benches arranged in even rows, blackboard rags tied to the slates, and a slightly raised desk in front of the class - this is how a classroom looked during the Empire. 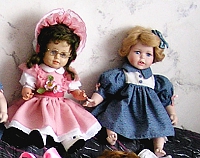 The "Children's Worlds" exhibition includes toys for children, and is divided into those for girls and for boys in accordance with previous attitudes towards typical roles.

Weaving was not only a very common profession until the end of the 19th century; in most households people wove cloth too for their own use.

Dining room in "neo-Biedermeier" (about 1910)
The Biedermeier style was revived in furniture design from about 1900 on as a somewhat more severe variation of art nouveau. This development was started by artists like Franz von Stuck and Peter Behrends.

The first room shows a parlour from the period around 1840 with the table set for afternoon coffee. The period following the empire is marked by modest middle class lifestyle and deliberate simplicity. Domesticity, companionship in the family and one's circle of friends is expressed in the furniture of this time too.

Village inns in the 1930s were the social centres of the villages. This is where people met, heard the latest news, celebrated and even had differences of opinion. The inn was however first and foremost a man's affair. Women who were seen here regularly soon gained a bad reputation. The air was filled with the smoke from cigars and cigarettes and on the tables were the inevitable jugs of cider, beer and schnapps glasses.

The clock tower ...or how time is measured

When you have a digital watch on your wrist you can hardly imagine what it was like for the rural population over the centuries who oriented themselves to the position of the sun or at least to the midday and evening church bells.

Read more: The clock tower...or how time is measured 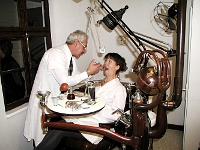 It is not unusual to look back at the end of a century. For this reason we began to set up an exhibition of different businesses and crafts from the passed 100 years in 2000. This shop alley is a sequence of 12 shops and small businesses that provide the visitors with interesting insights. All of these shops were either especially important in the 20. century or could not continue existing because of structural changes in the working world. Businesses like shoemaking, upholstery, grinding and cooperage can only be admired in museums today. Also, crafts like tailoring or millinery were replaced by factories over time. Different areas were especially important in the past century. The grocery store and the butcher’s shop were crucial for the food supply, the dentist and the pharmacy were essential parts of health care, the technological sector was covered by a watchmaker and a photographer.

The permanent exhibition of tin figures (the tin figure museum) from the collection of Prof. Dr. Gerteis was opened on 8th May 2005. There are many thousands of figures arranged in the estate's 220 m2 loft, by no means not only tin soldiers but a small world made of tin, as it were. The collection of tin figures (over 40,000 by now) that is familiar to collectors and had been on exhibition in Aach for ten years has found a new and attractive abode here.

The history of laundry

In order to be a judge of what a woman's job of laundry involved, you have to imagine the individual stages of a washday, as was the practice right up until the 1950s.

Read more: The history of laundry

Gail bakehouse from Polch in Maifeld

At the end of the agricultural exhibition you will find in a separate room the former Gail bakehouse from Polch in Maifeld, which has been reconstructed as it was in the 1930s.The master baker Wilhelm Gail had a new steam baking oven built at that time by the oven builders, Karl Rotbrust from nearby Bell, which had two superimposed baking levels and was laterally fired with coal. There was a reservoir on the oven for generating steam.

Toys from all over the world

The toy collection of Professor Barbara Schu from Cologne University of Applied Sciences is on display. Over 5000 pieces have been collected by the widely travelled textile designer. She originally bequeathed her collection in 1988 to the Cologne Rautenschrauch-Joest Museum.

Read more: Toys from all over the world

So many visitors enjoyed looking at life in earlier times as it has been shown in our first shop alley for 10 years that we decided to install another one in the upper floor of the east wing with a number of shops from a purchase of recently closed stores. Thus, the demonstration of professional life from the past two generations could be expanded with 12 new exhibitions:

Since the spring of 2015 the hat shop that used to be located on Brotstraße 26, Trier is in our museum in the archway that leads to the inner courtyard. The shop has been run by the Georg family for six generations. Perhaps they even used to manufacture hats themselves in earlier times.

You will find the exhibition of "Oven and chimney plates" in the former horse stablestable of the Roscheider Hof.

Chimney plates are cast iron plates which used to be set into the walls of the recess in the firewall between the kitchen and the parlour. They absorbed the heat from the fire and passed it into the parlour.